Creating a character is often approached at many angles. One way to mold a new character is to give them a general identity that plays by certain rules and expectations. In the next video, the KNKL show presents a system that makes more sense than most. He uses Archetype, Trope, and Spin.

We are going to use the same but call them Archetype, Class, and Twist. 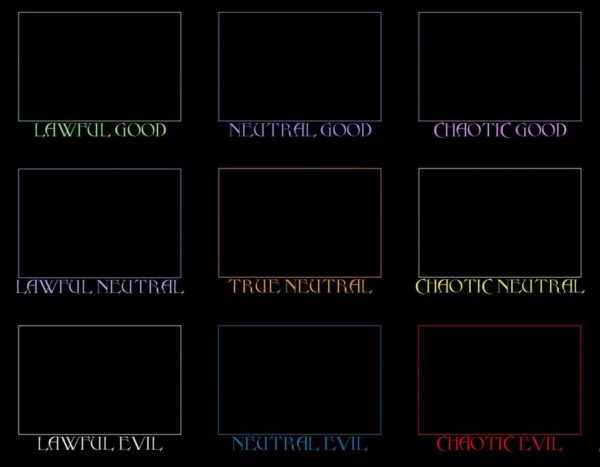 There’s no definitive list of archetypes.
One common in gaming is the famous D&D alignment structure, a graph that plots characters on two axes:
Good & Evil and Lawful & Chaotic.

While each of these graphs may not be 100% correct, hopefully these examples give you an idea.

Another categorization of Archetype is their general roles in the story.
These are recognizable in almost any story in almost any culture.

In this case, Class is in reference to a stereotyped role. In many games, this is defined as a class system. In more realistic games, this might be a profession. Class might also be a little more culturally or regionally specific.
Fantasy Classes:
Real World Classes:
Additional Class Information:

A class might be even more specific when given a race as well.

A character’s Twist is what sets it apart from characters that have been made before.
You don’t want to completely copy another character. A red colored Sonic is still Sonic. That’s just stealing. Feel free to borrow elements of a character, but be sure to give them new traits that haven’t been used before!

In a word document, come up with 6 unique character combinations. List each of the following for each character:

Just write them out. You don’t need to draw anything. But if you really like one, make sure to record it in your design log to use in the future.